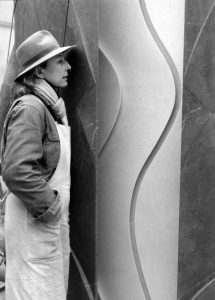 Born in Pisa, Italy, Serena Tallarigo begins  her first artistic research in 1962, travelling in Italy, Africa, France and the United States.
In 1972 Tallarigo arrives in France and opens her studio in Paris. During this time her studies include Drawing/Art school ABC and a research on Malevic, Mondrian and the Bauhaus period.
Her essay Sculptural Theory is a research on metal and acids for mural sculpture. She concentrates on Philosophy and Aesthetics. Her first one-woman-show is at the Gallery “Trois Rives”, Paris, France.Between 1976 and 1980 she works on metal and wood, her first project The Door is today part of a private collection in Paris, France. While committee member of the Association of italian Painters and Sculptors in affiliation with the Italian Cultural Center in Paris, France, she starts working with paper, embossed drawing technique on Reeves paper.By the end of this period Tallarigo visits Carrara, Italy, projects and executes “Project for a Temple”  white P marble sculpture (Private collection in Pennsylvania, Usa) and, in 1981,  gets a diploma in “Traditional Engraving”, Studio Grafica in Venice Italy. In the same year she opens a studio in Carrara and projects and executes “Bas Reliefs To-day“, sculptures in marble white P (Private collection Dreyfus Bank, Basel, CH).
One year after, in 1982, she travels to New York where in 1983 opens a studio and starts working and studying monumental sculpture. 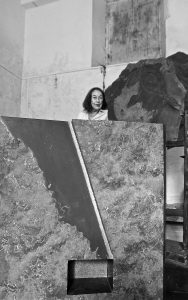 Between 1984 and 1986 the artist projects and executes “On the Edge of Stone at the Edge of Sculpture”  black and white marble sculptures. In the same year she is invited by Ted Reeds Architects, New York, to create a monumental sculpture “Triptic” , installation New York City.

In 1989 Tallarigo works on a new project “The Wall:10 Elements, 10 Commandments“, a concept of serial sculpture , poetry and tecnology; she also creates a series of paper works: Composition, Black Abstraction, Grey Abstraction, installation in Enimont Americas Inc. New York.
In 1990 she lives in both Carrara, Italy and New York, Usa. She starts working on the project “Traces“, sculptures in yellow marble of Siena, that ended in 1992 when the School of Visual Art in New York invites her for an art teaching course in Urbino, Italy.
In the same year, the Lions Club and the Bompiani family ask her to realize a Bas-Relief portrait of editor Valentino Bompiani, Milano, Italy. Installation, Lerici, Italy. Mentioned in the book “Da Shelley a Montale” by Isabella Tedesco Vergano, editor Marco Sabatelli, Dec.1995

Between 1993 and 1994 the artist works on a project “Feeling of Black“, cycled black of Belgium sculptures and started the project “RES” : Religion, Ecology, Social.
In 1995 she is invited by Euro Marmo Scultura to represent Italy in the conferences “Art and Industry” held in Arhus, Denmark, with her work “Something new from Some where else”, a sculpture in porfirico stone now installed in Graana Museum, Denmark.

Between 1996 and 1997, Tallarigo realizes the project “Res” and the project “The Wall: 10 Elements 10 Commandments”. In 1997 she realizes “The wounded Angel” a triptic, realized in mixed media on canvas for a travelling exhibition, Museo de Los Angeles di Turegano (Segovia).
In 1998 her work “Trace VI”, a sculpture in iron and yellow marble  of Siena, is installed in the “Parco dei Medici” “WFP” United Nations, Rome Italy.
She realizes “Sigilli” sculptures in iron and mixed media, and starts working on the project “Le case del Cielo”, 24 sculptures in black marble of Belgium, inspired by the work done by “Madre Teresa di Calcutta”.  Ending of the project in 2000. 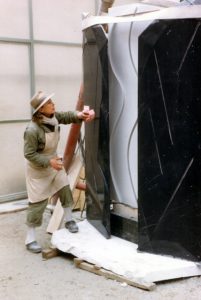 In 2001 Tallarigo projects and realizes “Signs of Her”, 6 sculptures in porfirico stone and mixed media.
One year later she receives a Diploma for merit and the Honorary Title “Cavaliere dell’Etruria” by the Accademy “Gli Etruschi”, Grosseto, Italy. In the same year, she receives another Diploma “First Prize” for sculpture, Livorno Italy .

The following year she works on “The weeping Horse” 21 works on wood paper, printing and tempera.

In 2004 the artist is invited for a show in the Museum Complesso Vittoriano in Rome Italy. The same year she is asked by the Literature Festival in Mantova Italy to create “Homage to Ranier Maria Rilke” a light structure, 370 mt long in the Mantova Rio.

Shortly afterwards, the sudden death of her beloved sister makes her temporarily leave the art scene.

In 2006 Tallarigo takes part in the International “ANCE” Art Prize “Art for Building” in Treviso, Italy. She receives a prize for her marble sculpture “Quando lo Spazio diventa Forma”, executed with computerized tecnology.
In the same year she works on a new project and realizes “Percorso”, sculpture in white marble  P, Carrara. By the end of the same year, she finishes “Paola”, a portrait of her deceased sister, in bronze.

In 2008 during the XIII International Biennale of Sculpture, she participates in various art shows, Carrara, Italy.
In 2009 the artist is completely absorbed by study and research, but in 2010 a working accident prevents her from any activity.
In 2011 she participates at the art show “Il Cuore per la vita in Giappone” in the Museum “Centro Arti Plastiche”, Carrara Italy.
In 2012 she is still recovering and travels to the United States.

In 2013 – 2014  Tallarigo works at various projects, travels to New York where are shown some of her 1980 sculptures collection, sculptures in black and white marble with reference to architecture and nature.
In 2015 she realizes a small triptic (drawing and painting) for Japan, Nabunaga Island. In the same year she works at the catalogue “Uno Sguardo al Dettaglio”, a photographic study on details of various sculptures to bring into evidence how ‘a detail’ can be seen as ‘a work of art’.

In 2016 she makes a donation in favour of the victims of the earthquake in center of Italy: a framed drawing dated 1979.
In the same year she takes part in the art show “Il cuore per la vita di Amatrice” at the “Il Centro di Arti Plastiche (CAP)” Museum, Carrara, Italy.